(Almost all the photographs here were clicked by GK)

Megamalai Wildlife Sanctuary is a 600 sq km stretch of forest in the Western Ghats, in Theni district of Tamilnadu. It is contiguous with and lies along the north-eastern border of the Periyar Tiger Reserve. The sanctuary was declared in 2012, and harbours two highly endangered endemics – Salim Ali’s fruit bat (Latidens salimali) and Hutton’s pit viper (Tropidolaemus huttoni). More common are elephants, leopards, Sloth bears, Nilgiri langurs, Lion tailed macaques, sambar, chital, dhole and Barking deer. Nilgai are also evidently found here. A tigress with cubs was enumerated in a 2013 survey and we heard claims of over eight cats having been enumerated in the December tiger census. Large tracts of pristine evergreen forests occur at altitude, interspersed with plantations – coffee and cardamom mainly – in the ranges we explored. Our exploration was limited to two of the sanctuary’s six ranges – Vellimalai and Kudalur.

This was another 500+ km drive from Bangalore. We peeled off from the NH7 near Dindigul, towards Theni. The route from here was: Sembatti-Batlagundu-Devathanapatti-Jayamangalam-Vaigai Dam-K. Vilakku-Kandamannur-Kadamalaikundu-Vellimalai

We had sought prior permission to enter the sanctuary at the Manjur checkpost. A twenty five kilometer drive through forested country got us to the gate of the 3,000 acre Pandyan estate. En route is an FRH in a truly delightful spot by a stream, with massive trees towering all around and plenty of birdlife in the vicinity. We tried but couldn’t get permission to stay in this FRH this time around, but that is a place to bookmark and go back to. Around this FRH, we heard loud repeated calls that sounded like shrill, manic laughter. After much searching, the culprits turned out to be a pair of grey hornbills. Malabar or Indian, we couldn’t discern. I later checked Xeno-canto, but could only find the prolongued calls I’m familiar with, for both species.

We did this stretch four times over two days, and saw quite a bit of birdlife, elephant and Black-naped hare. On a large tree that I cannot identify (but which GK thought was Ailanthus triphysa), we saw the largest congregation of Golden orioles any of us had ever seen.

A climb of another eight kilometers from the estate gate brought us to the Vellimalai Murugan temple, from where one gets a panoramic view of the mountain range. This second stretch is at a higher elevation and meanders through plantation and evergreen forest. Several troops of Nilgiri langur can be seen on this stretch.

The lion-tailed macaque proved to be more elusive, though it is reputed to be regularly sighted in the upper reaches. We also saw plenty of Hill mynas, a pair of Malabar trogons, a pair of Asian fairy bluebirds,  sambar, Malabar giant squirrels, a Spot-bellied eagle owl, a Green imperial pigeon, gaur and a muntjac (that barked repeatedly, the very first time I’ve heard this – sounded like the bark of a medium sized dog, a spitz or spaniel perhaps). Apart from other assorted birdlife. We also got a fleeting glimpse of a small creature disappearing into the undergrowth. GK was the only one who got a clear look and from his description, it was probably the Indian tree shrew. 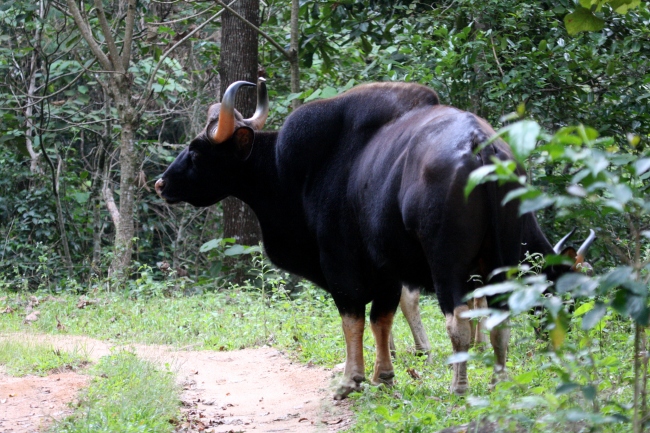 The landscape is very sparsely populated, but this was evidently not always so. Not very long back, an estimated ten thousand people lived in these hills, working the estates. With MGNREGS providing a less strenuous option, labour is now hard to find for estates like these. A hundred and fifty families from West Bengal are principally keeping the estate functioning.

On day two, we took a detour from the FRH to get to another estate at Anaikulipallam. This road is utterly dismal, and we did the eight or so kilometers in an MM540, on constant 4WD. The Scorp didn’t stand a prayer of a chance to negotiate some of the boulders or slopes on that track, so we left her parked at the FRH. There are some three stream crossings on that route and Thangaraj, the chap who drove us up told us about the jeep having been washed away downstream from the crossing nearest to the FRH not once, but thrice. It snagged on rocks some distance downstream each time and was hauled back using a tractor. Anyway, we spent some time with a most remarkable individual at the estate settlement (see next section) and were bounced and bumped down again in the late afternoon.

Since we were unable to get accommodation either at Pandyan estate or in the FRH, we were forced to drive down to the plains on both days – to Kadamalaikundu – some eighteen kilometers from the forest checkpost, this being the nearest village with accommodation of sorts on offer. 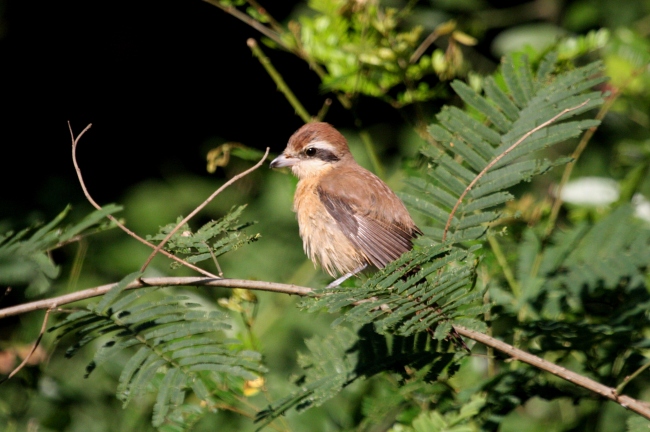 We met this extremely interesting man en route. Dr. P. Ramesh, PhD, is in his early thirties, works in the police department, and has a passion for wildlife, especially snakes. He runs an NGO called NEST – Netaji Snake Trust – and is involved with animal rescue, awareness dessemination, census operations and a wide variety of research work. When we ran into him, he was jeeping a group of around ten college students on a wilderness field trip to Anaikulipallam. This remarkable young man had spent his own money and effort to cook and carry a packed meal for the entire group, and which he generously invited us to share as well. He had also arranged for some provisions to be jeeped up for the evening meal (which again he’d cook himself). In a kit bag looped around his waist, he carried a snake venom extractor kit and some homeopathic versions of anti-venom. Ramesh does this often – getting different groups of students who are interested to go on field trips with him, to experience and understand snakes at first hand. 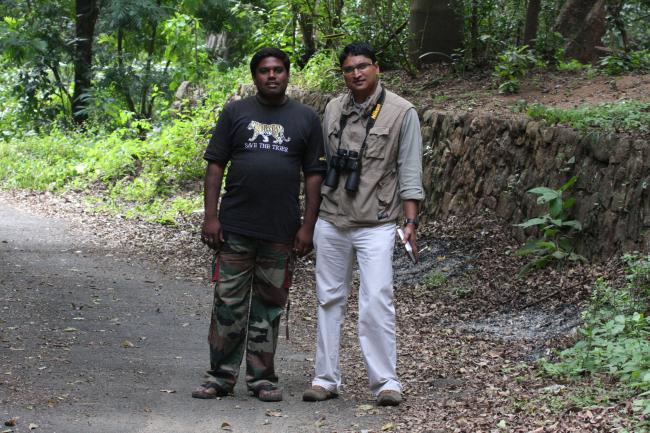 We got off the jeeps and walked the last stretch to Anaikulipallam and on the way, Ramesh showed us likely spots for finding Large scaled vipers, Green pit vipers and other snakes. He also talked about an attempt he is involved with to regenerate or cultivate coral reefs along the Tamilnadu coast in a bid to tsunami-proof the coastline. If you are interested in becoming a member of NEST, or in helping this young man with his work in any way, you can reach him at ramesnest@gmail.com.

While walking this stretch, GK and I heard repeated alarm calls reverberating from the valley below. I initially thought they were sambar calls, but these had a distinctly bovine quality to them. That was when Ramesh pointed out that nilgai occured here. I’m guessing that what we heard were nilgai alarm calls, though I’m unable to find any recordings online to verify this. I should also note that we frequently came across dhole scat on the path here.

On day three, we did a quick drive through the Kudalur range, around the Suruliyar Power House area. We saw fresh elephant dung and a very strong elephant odour at one spot, but the pachyderms didn’t show. This was in the morning and birds were up and about. This particular stretch had a remarkable number of Blue faced malkohas and Grey junglefowl, and on a silk cotton tree, we saw the largest congregation of Gold fronted leaf birds that we’d ever seen.

Poaching is a constant menace in all these forests, as is cattle grazing. We came across instances of locals poaching deer in Sathyamangalam TR, and now in Megamalai WS. The proliferation of lantana is another menace. Megamalai is fairly choking with lantana at most altitudes, and with a fair bit of parthenium as well.

On the way back to Bangalore, we stopped for a short while at Uttamapalayam to watch thousands of Indian flying foxes roosting on massive Arjuna trees by the banks of the Mullaiperiyar. We made a quick estimate of around a thousand bats in the three trees under which we stood, and there were more such trees along the far side of the river with still more colonies on them.

Here is a full list of sightings from these three days (or at least the ones we could recognize).