My experience in Thattekad in January enthused BIL B enough to want to do a repeat trip over a quick weekend. Accordingly we bussed in from Bangalore and pretty much replicated the itinerary from the prior trip. With one difference, but we’ll talk about that in a while.

Bhothathankettu was a disappointment and devoid of birdlife. Unlike the last time when I visited on a week day (Friday), we ended up visiting on a Saturday and the place was as lively with squawking tourists this time around as it was with avifauna the last time. The Flame-throated bulbuls were there though, along with the Racket-tailed drongos and Chestnut headed bee-eaters. I checked for the record-breaking teak tree mentioned in my previous post and not unexpectedly, it lay across the river somewhere, out of bounds without permission.

Mr. Luigi and the staff at PRL were hospitable as ever and we settled in with great hopes for the evening. We linked up with Gireesh Chandran at the place where I had sighted the Dollar birds the last time around (they were there this time too). Now Gireesh was accompanied by a couple of his house guests, and these two men had gawked their way through their wish-list over the past couple of days, barring three candidates –  Mottled wood owl, Black baza and Drongo cuckoo. And therein lay the rub. Gireesh assumed BIL and I would fall in with their plans to devote our energies to just these three species.

Anyway, we went into the reserve forest area adjacent to the sanctuary and saw a pair of Sri Lanka frogmouths, Yellow-browed bulbul, Brown-breasted flycatcher, White-bellied treepie and the much-sought-after Drongo cuckoo. Not counting the ubiquitous Malabar hornbills, Indian treepies and Racket-tailed drongos. At this point, the rain played spoilsport and we scurried back to town, ending the day’s work with a precious hour’s daylight wasted.

The next morning, Gireesh announced that he planned to take us all to Bhoothathankettu in search of the Black baza, and I was not pleased with this. We had just these two outings on our itinerary and it didn’t make sense (to me) to take BIL all the way to Thattekad and back without ever having set foot inside the sanctuary. At any rate, Gireesh wasn’t going to alter his house guests’ plans, and off he went to Bhoothathankettu looking for the baza. I wanted BIL to experience the rocky area inside the sanctuary that was so productive last time, and got Gireesh to call another guide. Some sort of tenuous arrangement was patched up hurriedly over the phone. BIL and I then drove back to the spot where there was a gap in the sanctuary’s fence and crossed in. Gireesh had some hesitation in sending us in on our own as a herd of elephants was sighted the previous evening in the area, but the fellow on the phone cleared that concern.

Anyway we found our way to the rocky area and joined Vinod, and he did a very decent job of guiding the morning’s outing. We saw Ashy drongo, Hill myna, Rufous woodpecker, Blyth’s starling (excellent and multiple sightings), Green imperial pigeon, Common Iora, Malabar hornbill, Gold fronted leaf bird, Orange minivet, Small minivet and Jungle nightjar. Apologies for the patricians and plebeians all merrily mixed up in that list. Or perhaps not. The highlight of the outing was a frogmouth and chick sighting.

The boat ride around PRL was spectacular as ever. Mr. Luigi himself joined us this time. Ironically, we saw the bird that was partly responsible for the morning’s hullabaloo – the Black baza – right off the boat, a short distance from PRL. And a truly spectacular bird it is. We also saw Black naped oriole, Asian fairy blue-bird, Vernal hanging parrot, Orange minivet and a Crested serpent eagle that thumped onto some small creature in the grass not fifteen feet from us and covered it’s trophy with outspread wings, glowering at us.

Post boat ride, we spent a glorious hour swimming in the river in front of the lodge, and I regret not having done this in the previous trip. Few experiences can beat lazing in a cool, slow-running river flanked by verdant greenery in hot weather.

I should also mention here that the staff and management of PRL showed an admirable degree of concern over the guiding issue, and took pains to follow up and apologize after we had returned to Bangalore. Another reason to return to PRL yet again, next winter.

Here are a few pictures: 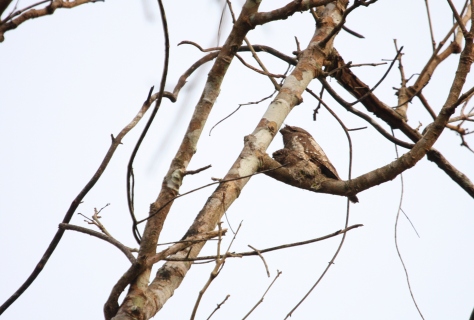 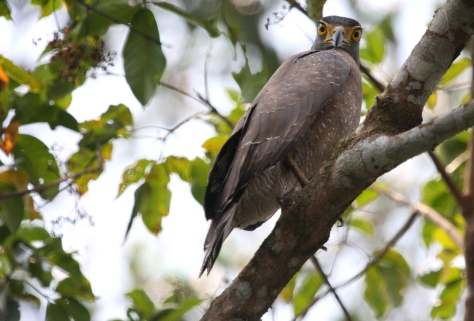