GiK and I had met SV and his family at K Gudi last, and we hit it off well considering our shared interests in wildlife. We had proposed a trip to Kabini together and SV promptly did the reservations as soon as he got back to Bangalore. By happy coincidence, BR who figures in my last K. Gudi post was also there, and it was a reunion of sorts. We did two nights at Kabini River Lodge, and GiK and I stayed back for an extra evening safari on day three, leaving for Bangalore late in the evening. This was a good plan as in addition to the extra safari, it allowed us to avoid return traffic on the Mysore road.

Kabini RL is considered JLR’s flagship property and their sightings are reputed to be second to none. Despite this I haven’t been there after a single trip ten years back. The scale of the establishment puts me off I guess. The safaris are indubitably spectacular, but the place lacks the sense of intimacy that the K. Gudi camp has, in my opinion. And BR agrees with me on this.

The “five kilometer” road. This is a disused and restricted (erstwhile) section of the highway to Kerala – SH17D. This road was fairly productive for us. Particularly interesting was a spot along this road known as the “burning place”, which bears the scars of the 2012 fire that ravaged the park. 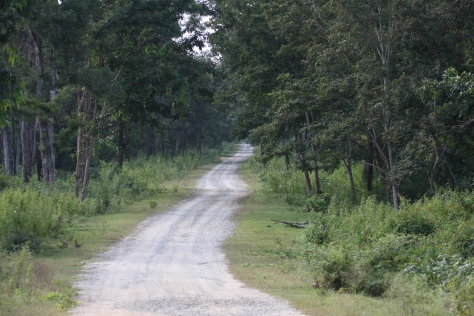 Changeable hawk eagle. We saw at least three CHEs and only one Crested Serpent Eagle in a reversal of the usual proportions. 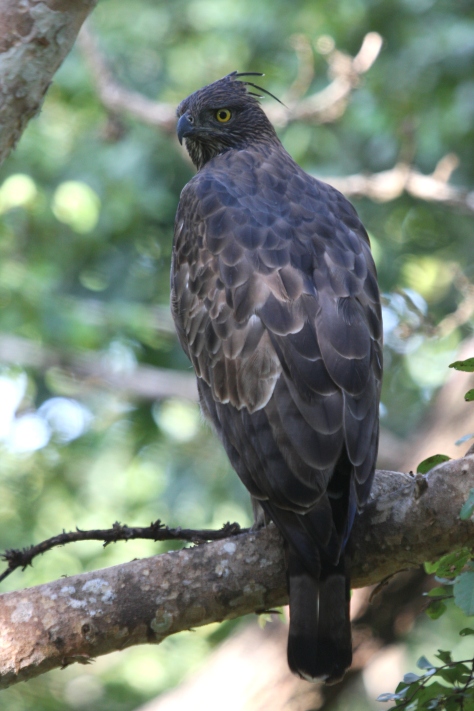 Sambar hind. Note the bald patch on the neck, which is a strange and not-fully-understood occurrence in the species. 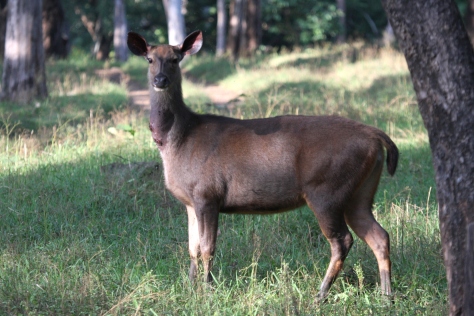 I was trying to get a shot of these two stags sparring, but they took a break to stare back at us instead. 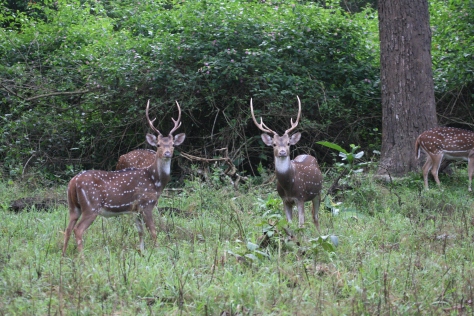 I saw Common langur without the tuft after a long while. The langurs that occur in Bandipur, K. Gudi and Galibore are all Tufted langurs, with a distinct tuft on their heads. Langurs helped us locate a she-leopard with a single cub that we sighted on two safaris, near the KV waterhole. Incidentally, there is a watch tower by this waterhole on which I’d spent an entire afternoon ten years back, with only  chital and langur sightings to show for all my trouble. 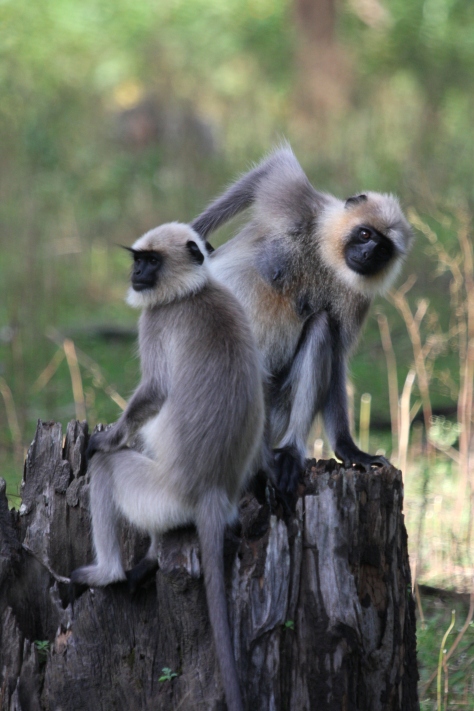 Both gaur and wild boar were strangely missing. We saw just two herds of gaur, and that in the last couple of safaris. And just one token wild boar. This animal below was photographed in the “burning place” 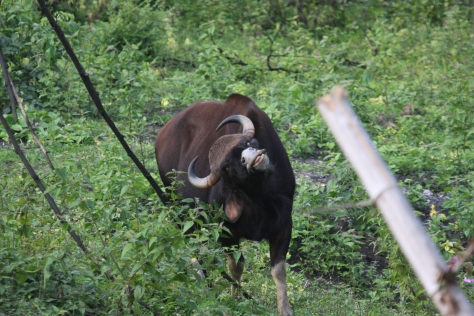 We saw plenty of elephants right through the trip. This makhna crossed the road just behind our jeep. 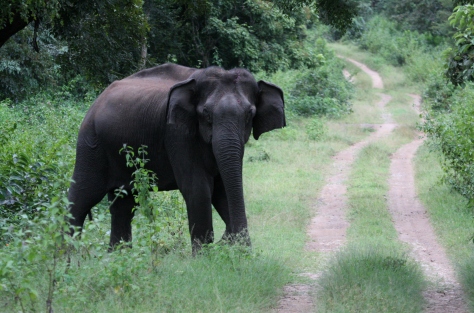 We met this young tusker while he was grazing by the highway. 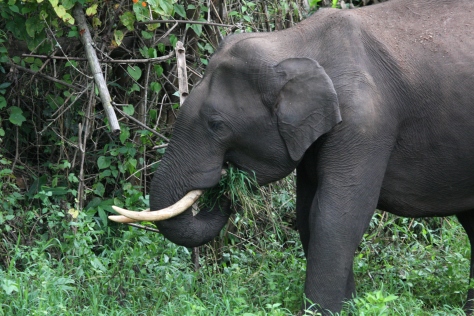 We watched a herd of three elephants systematically destroy a patch of teak saplings. 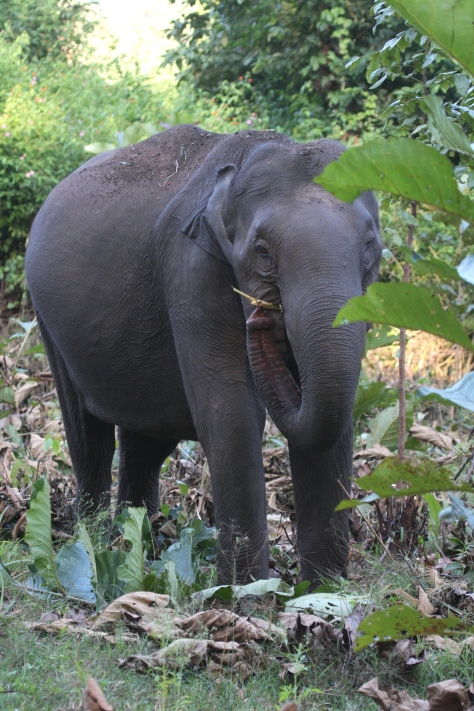 Elephants stand around all day and even sleep standing up. This cow gave her leg a break. 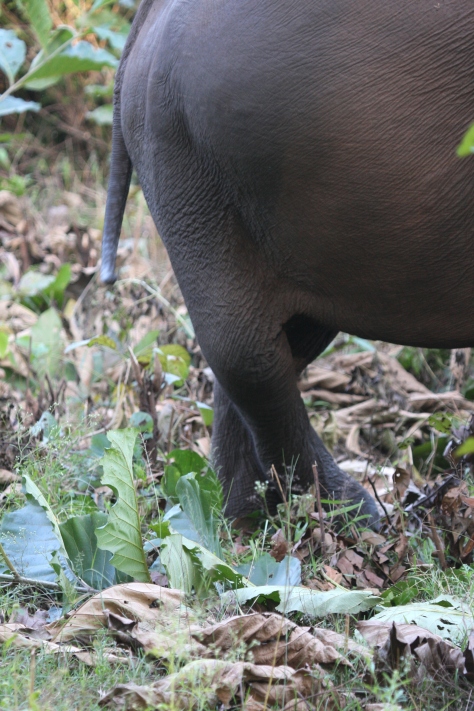 Another member of the herd of three approaching. 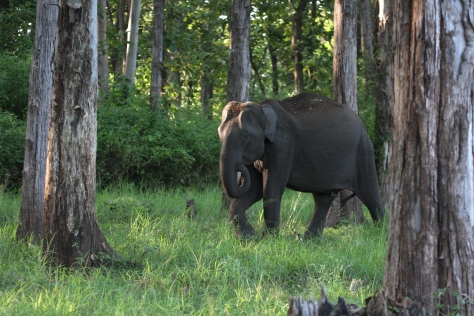 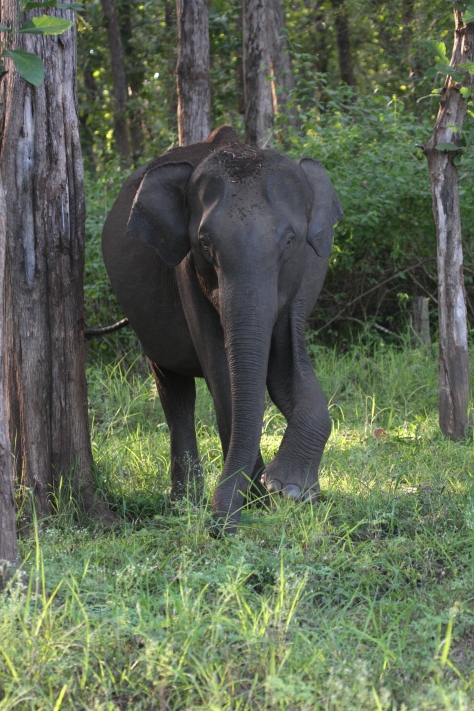 This cow approached very close to the jeep. And stood placidly grazing at spitting distance. I asked the naturalist Ravi if Nagarahole elephants were so habituated to human presence that they grazed like cattle around us. He replied that they do mock-charge frequently, and that the tolerance we were seeing wasn’t always present. 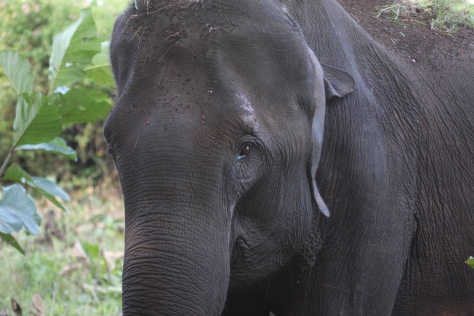 We sighted this large tusker with a broken tusk on two separate occasions, both on the “five kilometer” road. 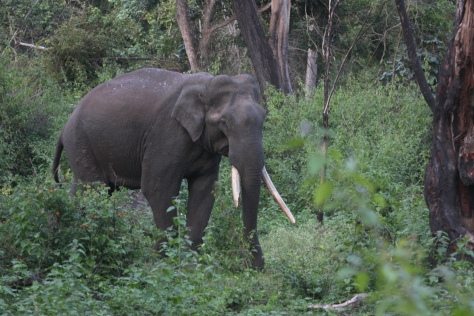 Another massive tusker, this one in the “burning place”. 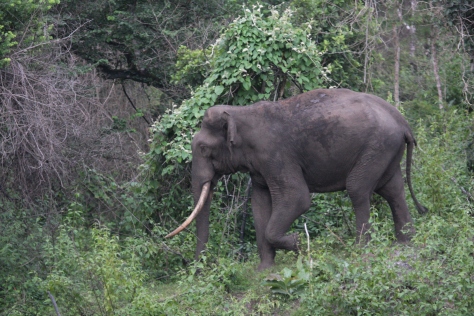 This tusker accompanied a small herd. 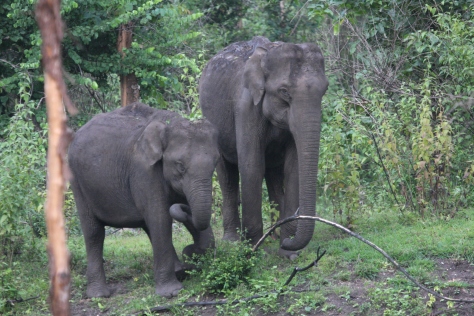 A pair of Golden  jackals (Canis aureus) came cantering down the track, stepped off it to pass the jeep, and regained the track to continue on their way. Typical jackal behavior. 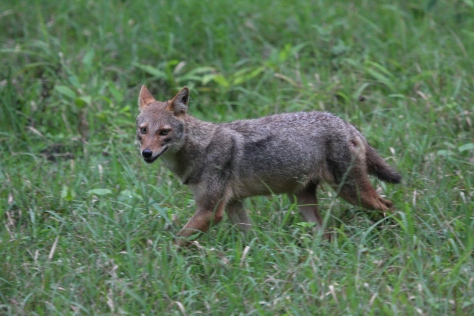 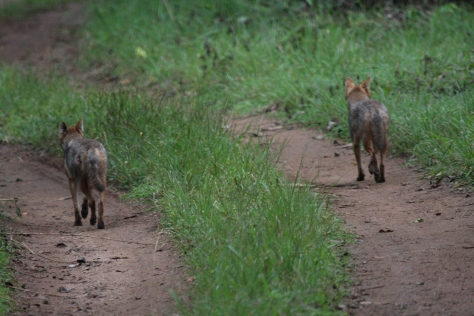 We encountered a pack of three dhole on the “five kilometer” road. Possibly the same pack was sighted by another group the next day in the “burning place”. 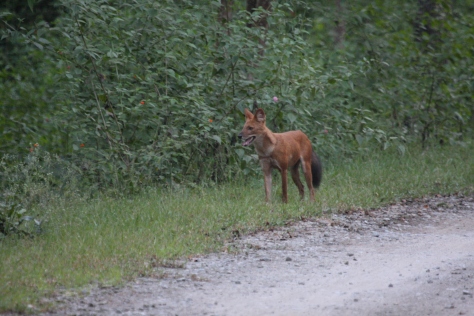 We had leopard sightings in three of the five safaris. This she-leopard was found on a tree by the highway, a little before the Balle gate. She stayed put for forty five minutes and treated us to a variety of poses. Two cubs were with her, and had descended out of sight before we arrived at the spot. 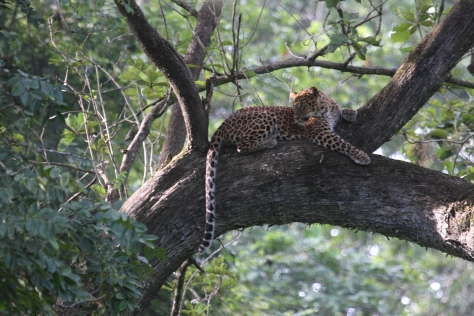 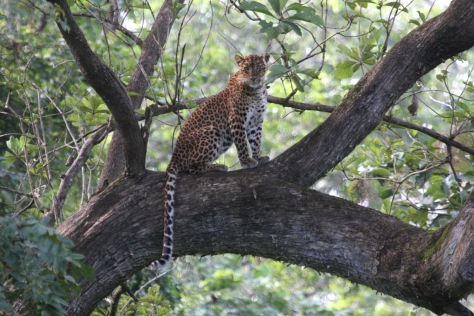 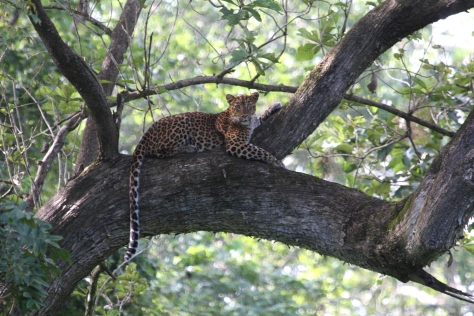 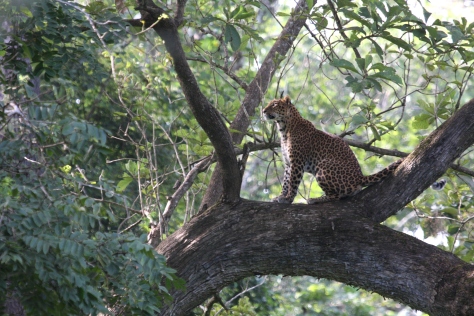 The cat was briefly distracted by something in the tree above. We later learned that there was a Giant flying squirrel (Petaurista petaurista) on the tree, but none of us noticed at the time. 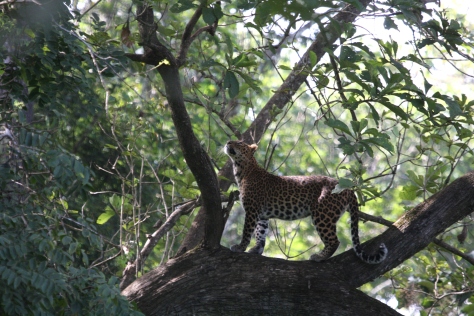 My jungle trees 101 progressed at a slow crawl. I learned to ID the Nandi tree or Crepe myrtle (Lagerstroemia microcarpa). This tree is called the naked lady of the forest alluding to how it looks when shorn of its bark – the trunk resembles that of the Eucalyptus, somewhat. And the Belleric myrobalan (Terminalia bellerica). Both of which were fairly common. I also learned that the Axlewood tree has a handle too – leper of the forest – owing to its pale blotchy patterns. There were plenty of these trees in Nagarahole. My old friends Tectona grandis, Terminalia tomentosa and Phyllanthus emblica were there in force too.

The birding lacked the usual intensity. What came our way was what we saw. There was plenty of unrecognized birdlife we zipped past in our quest for megafauna. Incidentally, Grey wagtails had just started to arrive for the winter and were seen around the Gol Ghar. But what was truly striking was the sheer number of Grey junglefowl everywhere. On two occasions, I counted eight individuals foraging at one place.