I did this trip alone. It was a follow-up to my last trip. Walking along the road then, the sheer number of species that had left their tracks in the sand overnight had planted this idea in my head. I had then wanted to come back to list and photograph the tracks seen on any typical day here. Thomraj is a walking encyclopedia on junglecraft and he was equally keen on this idea. I’m publishing that list and those pictures in a separate post.

Short-nosed fruit bats in the camp

I had left Bangalore very early in the morning, at 3:30 AM, intending to reach the camp by 6 AM. There are a large number of cattle that walk along that track during the day and anyone intending to study wildlife spoor has to make an early start before the tracks are all messed up. Reaching by 6 AM would give me two mornings instead of one. That and the notion of encountering wildlife at the break of dawn on the drive to the camp. I was extremely hopeful of elephant, leopard or sloth bear sighting, but nothing was stirring (except for a couple of herds of chital) and I reached the camp with nothing to show for my trouble. There too, Thomraj was tied up guiding another guest and as my check-in time was hours away, I couldn’t make undue demands of his time. I was therefore constrained to hang around camp, which was not altogether a bad thing. The Sida patch kept me busy with the butterflies, and the pair of White-rumped shama that frequent the camp was bold enough to perch very close if I stood still. 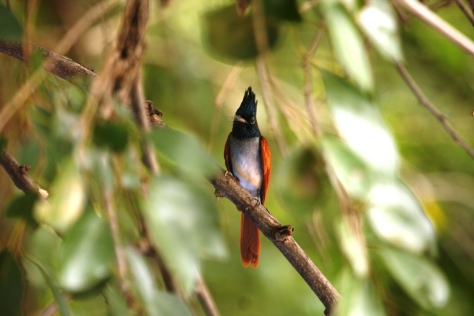 Juvenile male Indian paradise flycatcher. This individual provided us with some minutes of close-up entertainment as it hawked vigorously beneath the promontory.

The species mix in the Sida patch was different from that on my last trip three weeks back. Common crows were all over the place this time. There was also Common rose, Crimson rose, Tawny coster, Plain and striped tiger, Common sailer, Blue and Dark blue tiger, Common grass yellow, Common jezebel and plenty of Psyche. 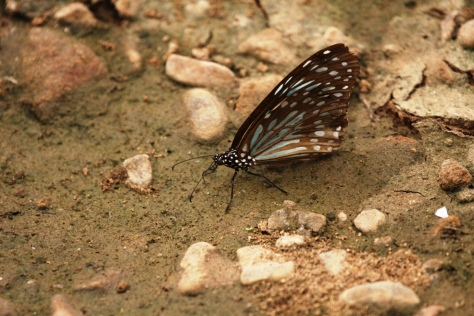 I had wanted to sight a Four-horned antelope for a while now. Thomraj suggested we climb up the hill in the late afternoon and settle down on the summit for a couple of hours. He thought that if we stayed still and silent, we would probably catch sight of one. The new manager  – Abhijit – was also keen on this idea and the three of us set off at half past three. The weather was uncomfortably hot and the climb was a stiff one. We made it to the top of the hill without too much difficulty, but Thomraj’s plan was to ascend yet another hill beyond this one.  We had just started ascending from the watchtower when we caught sight of our quarry – a lone doe that briefly stared at us before bounding up the hillside in alarm. Mission accomplished but we continued anyway to see what else we could get.

The second stretch was steep and very taxing, but we eventually arrived at the top, drenched in sweat, panting desperately and tanned three shades darker. There is a large, flat rock there, with a spectacular 180 degree view of the valley beyond. The plan was to sit at this vantage point for as long as the light permitted, while scouting for signs of movement across the vast area in sight. Sure enough, a sloth bear was presently seen on the far hillside, foraging. Thomraj said there was a second one, but Abhijit and I could spot just the one.

Langurs called in alarm persistently from beyond an intervening ridge and a lone sambar deer also belled a few times. The persistence of the calls convinced us that a leopard was afoot, and we had high hopes of catching sight of it. The leopard didn’t show itself for the next hour however though the calls continued, and as the light was fading, we had to reluctantly abandon our position to return to camp. On the way down, we spotted another slot bear, this one much closer and moving along a line that seemingly converged with our own. The bear descended into a rocky depression shortly thereafter however and wasn’t seen again. 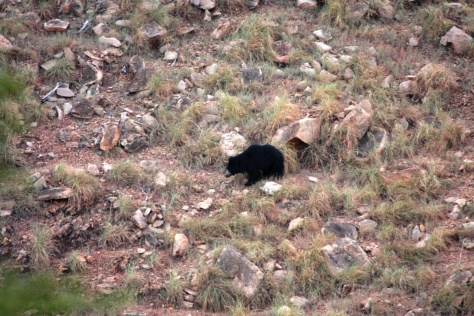 The stiff climb induced a very painful bout of cramps in my legs as we were relaxing in the camp later that evening.

Monitor lizard in the camp

We hardly paid any attention to birds this time, but here’s the list for what it’s worth.